You are in:
Home» JLA Guidebook» 4. Setting up a PSP» Identifying and managing partners/stakeholders
logincreate account 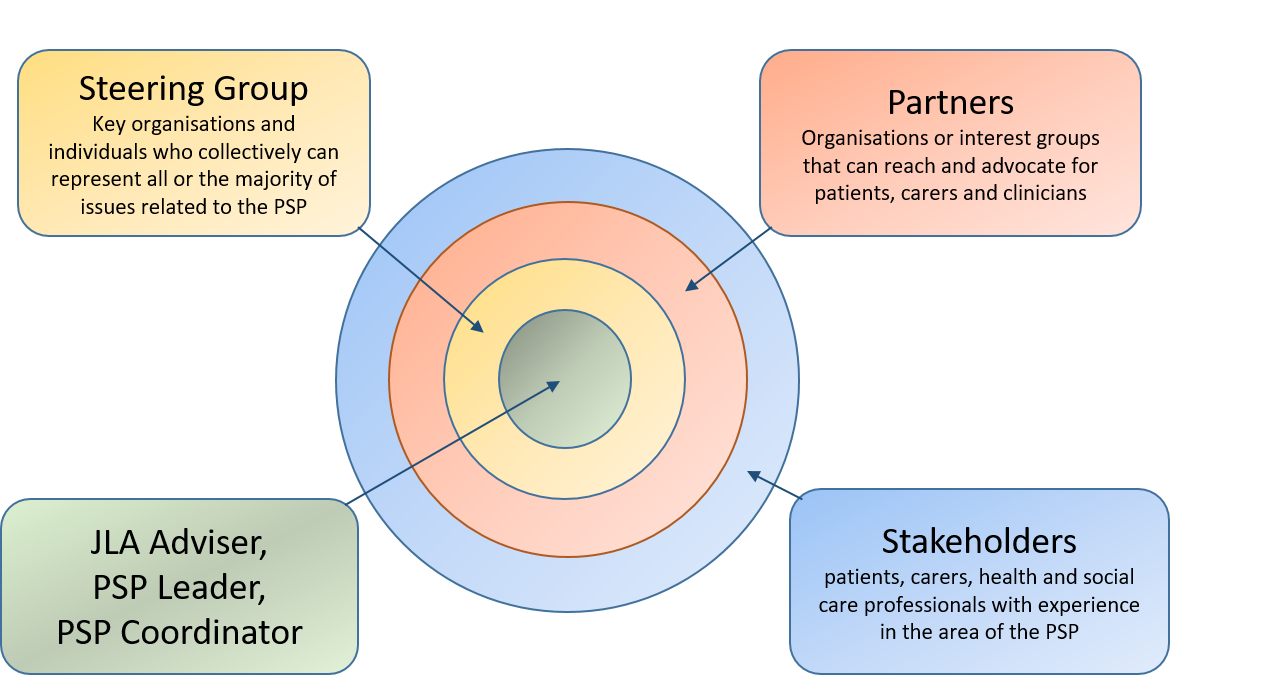 The diagram above shows the range of people and organisations who are involved in PSPs. The JLA Adviser, the PSP Leader and the PSP Project Coordinator are central to the process.  It is essential to reach out to partners and the patients, carers and clinicians affected by the health topic being considered.

It is important that all the organisations that can reach and advocate for patients, carers and clinicians should be invited to become involved in the PSP as partners.  This helps PSPs to demonstrate that the process was inclusive and aimed to reach as wide a range of constituents as possible.  While Steering Groups may not be able ot be fully representative of their communities of interest, the Partnership can aim to be.

Partners should be organisations or interest groups that represent the following:

They may therefore include:

Partners will be approached to ask if they would like to support the PSP.  With permission, they may be listed on the PSP website and will be asked to help spread the message about the PSP to their contacts.  PSPs can maintain the interest and engagement of their partners by keeping in regular contact with them via newsletters or other communications.  They may produce materials, guidance and templates to make is easy for Partners to promote the PSP to their networks.

Finally, a PSP can benefit greatly from the involvement of the relevant Cochrane Review Group, and other parts of Cochrane, both in terms of identifying relevant systematic reviews at the evidence checking stage, and for promoting the priorities that may require a systematic review.

Cochrane is an independent network of researchers, professionals, patients, carers, and people interested in health.  Cochrane’s 11,000 members and over 68,000 supporters come from more than 130 countries.  They work together to produce credible, accessible health information that is free from commercial sponsorship and other conflicts of interest.  Many of its contributors are world leaders in their fields - medicine, health policy, research methodology, or consumer advocacy - and its groups are situated in some of the world's most respected academic and medical institutions.

Cochrane also works with a global community of patients and carers.  This includes the Cochrane Consumer Network which is a network of patients, carers and others who may be able to contribute to the work of a PSP.  You can contact the Cochrane Consumer Engagement Officer for a range of support in recruiting to PSPs and help promoting surveys to patient communities.

Cochrane has produced freely accessible learning resources called ‘Cochrane Evidence Essentials’.  The four co-produced learning modules are an introduction to evidence-based medicine, clinical trials, systematic reviews and how to find and understand Cochrane reviews.  They may be valuable for those who are involved in research priority setting but who are new to these areas.