You are in:
Home/ News and Publications/ My reflections as a carer on questions about stroke research
logincreate account

My reflections as a carer on questions about stroke research 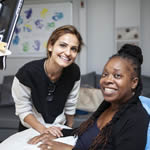 Sandra is on the Steering Group for the Stroke Priority Setting Partnership (PSP). Her partner had a severe intracranial haemorrhage (a type of bleed in the brain) while on holiday in 2019. It robbed him of speech, and movement down the right side. He also has swallowing difficulties and memory loss.  After 15 weeks in hospital, he is now resident in a nursing home in Birmingham. She visits regularly when she can and is in regular contact with his care team to understand his needs. At the start of the lockdown in March, Sandra moved in to his nursing home for several months so that she could continue to see him and care for him.

Sandra was encouraged by a Stroke Consultant to get involved in the PSP. They approached her at the end of her partner's hospital stay.  She says:

“I hope the PSP not only increases peoples’ understanding of the experience of stroke survivors but also those who are directly affected like relatives, close friends and carers. I hope that more of their concerns are heard, and support and training can be given.

I hope that because of the PSP, funding for stroke research will be used in the areas prioritised by data analysis.”

During March to September 2020, the PSP gathered some 3,900 questions from around 1,400 people affected by stroke and the health and social care professionals in stroke. The Steering Group worked in groups to form overarching questions that were indicative of many of the original submissions.

“I see my role as someone who represents family or friends or carers of stroke survivors.

I have analysed those responses pertaining to carers: their questions and concerns, and sorted these responses into themes, finally presenting them to the carers' group via Zoom conferencing, for further discussion and sorting until an indicative question for each bundle was agreed upon.

I have been very interested in reading, first hand, the questions submitted by other carers, and their concerns related to the emotional and psychological impact of stroke not only for survivors but friends and relatives too.

The challenge has been mainly in channelling the many diverse concerns of carers into "bundles" with a question that is pertinent (indicative) to each.”

These indicative questions are currently being reviewed by an Information Specialist, prior to checking the evidence base to see which might already have been answered by research. Those questions will be removed. The final list of unanswered questions will be prioritised by stroke survivors and carers, like Sandra, and professionals so that the Stroke Association, and other research funders can target funds to make the biggest difference to the lives of people affected by stroke. Sandra has high hopes for the PSP, and so do we.

With thanks to the PSP Steering Group member, Sandra, for writing this and Sandra Regan, Stroke PSP Co-ordinator, who arranged for this article to be forwarded to us.