You are in:
Home/ News and Publications/ Adapting PSP surveys and workshops to make sure everyone can get involved
logincreate account 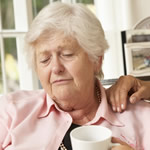 It’s important that Priority Setting Partnerships (PSPs) think about the people they are trying to talk to and how to make it as easy as possible for them to get involved. We see good examples of this often. It can be about PSPs making sure that if people are taking part in workshops who don’t use email often or at all, they phone them to let them know about arrangements. It can be about surveys being available by post instead of just electronically. It can be about good use of social media. The Canadian Dementia PSP has announced its Top 10 recently and made some interesting adjustments to help people with a diagnosis of dementia to join in with the priority setting.

When designing the survey, the PSP Steering Group understandably wanted to test how it would be understood by other people. A member of the Steering Group, Phyllis Fehr, had a diagnosis of dementia and was able to take a draft of the survey back to her advocacy group, the Ontario Dementia Advisory Group, to see how easy the survey was to use. They recorded the discussion and shared this with the rest of the Steering Group so that changes could be made to the survey.

This kind of face-to-face work also helped with the interim prioritisation stage, where the unanswered questions received from the first survey are listed and persons with dementia, friends, family and caregivers/care partners and health professionals are asked to choose the most important ones in their experience. The number of responses to the interim survey from persons with dementia was lower than the Steering Group wanted.

The Steering Group used the responses they’d received to choose the 20 questions to take to the final workshop in the normal way. However, to check that these included questions of importance to people with dementia (given their low response) they asked for help from one of their partner organisations who talked to groups of persons with dementia face-to-face about what categories of questions they thought were most important. All of the questions highlighted in these discussions had already been chosen as important by the survey respondents. This reassured the Steering Group that even though numbers of responses to the survey had been low, people who had responded were choosing questions that were important to those with lived experience too. However, three extra questions were highlighted as being very important in the face-to-face work, so these were added to the list of those to be discussed at the final workshop. This meant a total of 23 questions being taken to the final workshop rather than 20.

About a quarter of the people taking part in the final priority setting workshop were persons with a diagnosis of dementia for between 2 and 10 years. Normally a PSP workshop takes place on one day, from around 10am until 4pm. This can be a long tiring day! The Canadian Dementia PSP Steering Group decided to spread the workshop over two days and provide accommodation for everyone, to make sure that people did not become too tired to take part fully in the process. The meeting started at lunchtime on day one to give people time to travel there without having to leave home too early. Having stayed overnight, participants were refreshed ready to tackle the second half of the meeting the next morning. They finished at lunchtime on day two, to give them the afternoon to travel home safely.

The venue was close to public transport and people were given clear photo instructions for getting around. A separate room was also reserved specifically for participants who needed to take a break from the workshop. 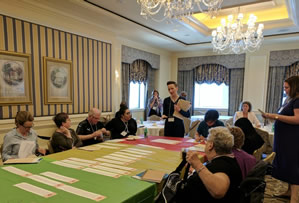 The meeting used question cards that were a different shape to the standard A4 used by most PSPs. Cards were wider and shallower so that they took up less room when spread out and people could read them more easily. There was no extra information about the interim ranking on the back of the cards as it was felt that this could be confusing. A system of coloured tablecloths was used to help people see clearly what was being suggested as a priority and what wasn’t. Questions on the green tablecloths were proposed as being in the Top 10, those on the yellow tablecloths were in the middle, and those on red tablecloths were at the bottom of the list.

Normally, in the final session of the workshop the question cards are spread out on the floor in order and chairs are set out in a horseshoe shape around them. The carpets in the venue were very brightly patterned which would have affected how well people could see the cards, so they were set up on an extra-long table instead.

The proposed Top 10 was shown live on a screen. When specific questions were being discussed, the workshop coordinator highlighted these on screen.

It’s important to plan these kind of considerations well ahead, particularly as they involved extra costs for the PSP, but on this occasion the adjustments made really helped the participants to get involved and therefore helped the PSP to get the best result.

Jennifer Bethell, PSP coordinator said “We knew that asking people to share their experience of dementia with us – in a survey or in a two-day workshop – is asking a lot. We were so fortunate for all the help and support the Canadian Dementia Priority Setting Partnership got along the way. ”

Phyllis Fehr, Steering Group and Ontario Dementia Advisory Group member said “Often people with dementia are not heard or acknowledged. However, with the Canadian Dementia Priority Setting Partnership, people with dementia were heard, respected, listed to and engaged. It showed the true meaning of inclusion.”

Katherine Cowan, JLA Senior Adviser, chaired the workshop: “From start to finish, the Canadian Dementia PSP Steering Group took great care to ensure that people with dementia were involved in the planning and delivery of the priority setting process. This helped to ensure that meaningful participation was secured, and that true collaboration between people with lived experience, carers and health professionals could take place. It was an amazing moment at the end of the workshop when one of the participants declared that the shared top 10 was actually better than his own top 10.”