You are in:
Home/ News and Publications/ Reflections from new JLA Advisers
logincreate account 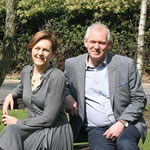 Jonathan Gower and Suzannah Kinsella joined the team as new JLA Advisers earlier in 2019. We asked them to write about their experiences so far now that they are both working with PSPs. Very appropriately, they decided on a Top 10 of what has struck them as most interesting and valuable about the JLA PSP process:

1.  Having the JLA Adviser Chair meetings is in itself a powerful leveller: Having spent the last 25 years sitting on committees which are chaired by eminent professors with a couple of patient or public representatives "sitting in", it struck me when I Chaired my first Steering Group meeting that having a neutral Chair immediately defuses any notion of a hierarchy and puts all members on a level footing, creating a space where professional and lived experiences are equally valued and respected.

2.  The power of hearing each other's voices: Often in research formats, such as focus groups, the loudest voice can tend to dominate or at least set the agenda for a discussion. In contrast, the JLA final PSP workshop starts with participants each in turn, sharing the story behind their involvement with the workshop and the reasons for their top three priorities. I've been struck when facilitating my first few workshops that this simple way of creating a respectful space to hear and be heard sets the tone for the rest of the day and helps participants to sometimes re-consider their opinions in light of these stores.

3.  Following the same principles but every PSP is different: Although all PSPs adhere to the same principles and general methodology, each one brings with it a unique set of challenges which requires an adaptive approach. I am the JLA Adviser for the Children's Cancer PSP. We have great input from parents whose children have had cancer but getting the voice of children (under 16s) themselves is going to be a real challenge. We have a superb Steering Group with a wide breadth of expertise and experience who are embracing this challenge with enthusiasm and creativity.

4.  Reaching out beyond the online survey: Often the online survey is the PSPs main tool for gathering questions about a condition or health area. But sitting in front of a computer or tablet or typing into a mobile phone just isn't the best way for some people to share their views. We are thinking hard about this in my current PSPs to ensure people with experience of stroke, children and parents with neurological conditions and people with arthritis can ask their questions in ways that work for them. Whether that's local conversations or short film vox pops...

5.  The end is just the beginning: Agreeing the "Top 10" is such an achievement after months of work on a PSP but it needs to feed through to research questions which then get funded. The recent ‘More than a Top 10’ report has highlighted the need to plan for the end of the PSP at the beginning of the project and I am encouraging my PSPs to do just that and think about how the outputs will be disseminated to influence funders, researchers and wider audiences.

6.  The experience of 100+ PSPs: Taking on your first PSP can be quite daunting for a newbie, so it has been wonderful to be able to reach out to other JLA Advisers for their guidance when needing to ask 'have I done this right?' - 'how did your PSP tackle this?'. Because previous PSPs have engaged with such a wide range of people over such a wide range of conditions and health areas, there is a wealth of accumulated experience to draw on.

7.  A social movement supported by social media: When I joined the JLA I was excited to find it described as a "social movement" - I'd never been part of a social movement before! I remember admitting that I had never sent a tweet - oh the looks I got... I have now come to realise that tweeting is a great way to raise awareness of a PSP and engage a wide population in the work we do. I have now sent my first tweet, watch this space!

8.  A truth hiding in plain sight: When I explain the James Lind Alliance and its PSPs to friends and colleagues and its aim to re-balance the research agenda in favour of patients, carers and clinicians, they proclaim how important this work is but also exclaim how surprised they are that it is needed, so obvious it seems that patients, carers and clinicians should be at the heart of the research agenda.

9.  A pleasure and a privilege: I am on a steep learning curve but have been warmly welcomed by the fantastic JLA team who are so supportive. Having people share what can be very personal experiences can be difficult at times, but it is testament to the JLA process that they feel able to do so in a safe space. It is such a privilege to be part of the JLA team and the wider JLA PSP communities who are so committed to making a difference. Personally very rewarding and so much more to get to grips with!

10. What's left? So much!: When I learnt that there have been over 100 Priority Setting Partnerships over the past 15 years, I thought that when I joined the JLA there would not be many health conditions and health areas left to work on, but how wrong I was, there are still so many conditions yet to be explored by a PSP and so many unanswered questions waiting to be researched. Thyroid problems, STDs, I'm sure I could name others...