You are in:
Home/ News and Publications/ Patients’ and Researchers’ Priorities: a mismatch still exists
logincreate account 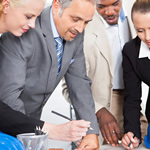 Katherine Cowan, the JLA’s Senior Adviser, tells us about a paper suggesting that much of the research being done still doesn’t match what patients and clinicians want to see researched.

“When Iain Chalmers, John Scadding and Nick Partridge first conceived of the JLA back in 2004, they asked a simple yet radical question: why not ask patients and clinicians what they want research to address?  It seemed like a no-brainer: patients and clinicians are at the forefront of healthcare, they have unique concerns, their taxes and donations fund research. Yet, they didn’t seem to have a voice as far as setting research priorities was concerned.

“A paper published in The Lancet by Deborah Tallon and her colleagues in 2001 showed tangibly why this mattered, providing evidence of a mismatch between what patients and clinicians wanted researched, and what was actually being done.  In osteoarthritis of the knee, patients and clinicians were overwhelmingly interested in the possibilities of non-drug interventions, such as education and advice, and knee replacement surgery.  Yet research in these areas was comparatively sparse - most research was about drugs.

The JLA has been asking patients, carers and clinicians what research they want done for more than 10 years now.  But are researchers and funders listening? A paper published in June, by Sally Crowe, Iain Chalmers, Mark Fenton, Matthew Hall and me, suggests that there is some way to go.

“Taking data from the first 14 JLA Priority Setting Partnerships’ (PSPs), the treatments mentioned in prioritised questions were compared with those assessed in random samples of commercial and non-commercial clinical trials recruiting in the UK over the same period.

“The analysis showed a mismatch that echoed the one found by Tallon et al in 2001: a difference between the types of treatments that patients, carers and clinicians were interested to know more about, and those being evaluated by researchers.  For example, drugs accounted for only 18 percent of the treatments mentioned in PSPs’ priorities, yet in registered non-commercial trials, drugs accounted for 37 percent of research.  Perhaps unsurprisingly, in registered commercial trials, drugs accounted for 86 percent of treatments under study.  A very low proportion of the commercial trials studied the effects of the non-drug treatments – those rated important by patients and clinicians.  This suggests that few trials compared drugs with non-drug interventions: for example, the comparison of drugs with psychological therapies for treating mental health issues.

“So, 15 years on, the landscape exposed by Deborah Tallon is still familiar.  There are a range of possible reasons why this might be the case.  For example, aside from JLA and a few other initiatives, patients and clinicians are still not routinely involved in setting the agenda for research.  Their concerns may not automatically occur to researchers and funders.  It may also be that the kinds of questions raised by patients and clinicians can be difficult to address – drug trials are easier to design and evaluate than those testing psychological therapies or service delivery – so perhaps there’s a methodological disincentive.  Finally, how effectively are PSPs at promoting their priorities to the research community?  We know that some have struggled to be heard, while others have attained greater levels of engagement from funders and researchers (although happily we are seeing increasing examples of success, that we encourage PSPs to share with each other).

“I urge you to read the paper. In the end, much of this comes down to the avoidance of waste.  It makes sense for funders to invest in research that is of relevance and interest to people who will benefit from it.  We know that there are brilliant researchers out there who want to do research that matters to patients.  Funders and research institutions are urged to use JLA PSPs’ priorities and to engage with the PSPs.  This is not about abandoning innovation or stifling creativity, but rather creating a more balanced research output that actively addresses the concerns of its end users.  It may be harder to address a question that has come from a PSP, but people – often those who are very unwell or who are working at the sharp end of our resource-constrained health service - have given their time and effort to raise it.  We need to listen to them. “