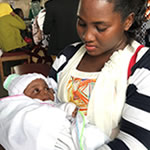 100 James Lind Alliance (JLA) Priority Setting Partnerships (PSPs) have now published their research priorities. It’s an achievement that involves the hard work of thousands of patients, carers and health and care professionals. JLA PSPs originated in the UK, but it’s exciting to see how the method is increasingly being used across the globe.

JLA Advisers have already supported priority setting work in Germany, Canada, Australia, Uganda, Ethiopia, the Netherlands and Sweden and a JLA Adviser, Tamara Rader, is now based in Canada in a pilot collaboration with the Canadian Agency for Drugs and Technologies in Health (CADTH).

Tamara says, “With support from the JLA Executive, knowledge of the Canadian context, and a commitment of resources from CADTH for this activity, I look forward to supporting research teams in Canada. The pilot project will be a way for Canadian researchers to continue to embrace the principles of the JLA as they bring together patients, families, caregivers, and clinicians to identify and prioritize evidence uncertainties that they agree are the most important”.

Casper Schoemaker, who led the JLA PSP in Juvenile Idiopathic Arthritis in the Netherlands explained what interested him in using the JLA process:

“I read about the JLA in the scientific literature. I liked the fact that at the one hand it is rooted in the Evidence Based Medicine movement and at the other hand patient and carer involvement is key. And the fact that clinicians are involved from the start. “

Dolores McKeen from the Anaesthesia (Canada) PSP explains why she was so keen to use this process to set priorities:

“The JLA method for priority setting partnerships is widely regarded as the gold standard for this process. We wanted to ensure we followed a rigorous process and have the appropriate support throughout the process… Overall, the process is very adaptable and pragmatic, so it was not terribly challenging to undertake it in a different country.“

Toto Gronlund, JLA Adviser, has been working with PSPs in both Ethiopia and Uganda. She says:

“It is a real privilege and inspirational to work with these PSPs who are translating the JLA principles not just into the local language, but into the local setting. Both PSPs challenge the usual process of PSPs in western settings, where participants are generally literate and informed of their condition, where there are existing support and professional networks for the condition, and digital technologies are in common use.”

You can see a summary of the JLA process here and read a more detailed account of each step of the JLA PSP process in the Guidebook. If you have questions about how the JLA could support your priority setting plans in your country, please email the team on jla@southampton.ac.uk.